YOUR VIEW!! Is The Federal Government Right or Wrong For Arresting Sowore Over Revolution Now Protest? 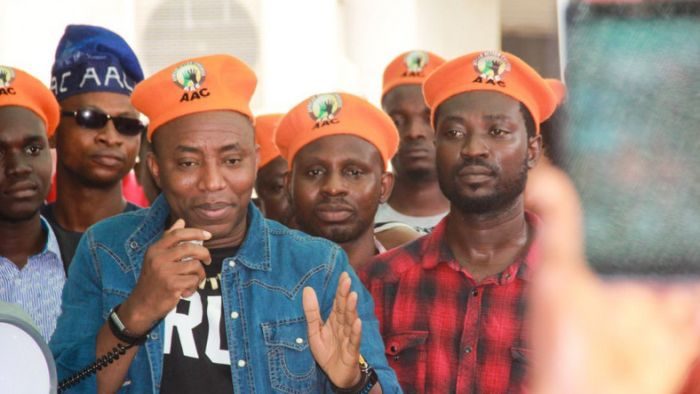 In a reasonable country, public opinion should be respected as long as it is a move to set things right in a country where nothing is working.
If every Nigerians decide to keep quiet about issues of Kidnapping, killings, terrorism and lots more out of fear of being picked up by DSS, that will be a voluntary submission to an unnecessary tyranny.
The issue of Sowore‘s arrest over his planned revolution now protest on Saturday 3rd of August 2019 came as a shocker to many Nigerians. No one saw it coming so early.
Sowore before his arrest had earlier planned to stage a “revolution now” movement in over 21 states in Nigeria. According to him, the revolution is to liberate Nigeria from, maladministration, insecurity and lots more.
While, explaining the reason behind Sowore‘s arrest, DSSsaid in a statement;

Meanwhile, Nigerians are divided in their opinions on this issue. Some Nigerians are of the opinion that Sowore being a Presidential candidate in the last election and staging a “Revolution Now” could mean “a failed presidential aspirant trying to overthrow a sitting government“.
On the other hand, many Nigerians are against Sowore‘s arrest by the DSS, describing the arrest as a way of shutting off public opinion completely.
What if the revolution turn rebellion or riot, leading to destruction of lives and properties. Let’s not forget that almost all protest moves against the Federal government in the past claimed lives while causing injuries to many.
The question now is

Do You Think The Federal Government Is Right or Wrong For Arresting Sowore Over “Revolution Now” Protest?

“Naira Marley and Family Together in a Picture
“Bobrisky Finally Speak up on “Sleeping With Mompha”, [Full Gist]
“One African music fest,list of Celebrities performing live ,(Olamide drops info)
“Bella Shmurda apologies to Seyi Law for not showing up in his Show
Loading...
No Comments Yet Drop a Comment